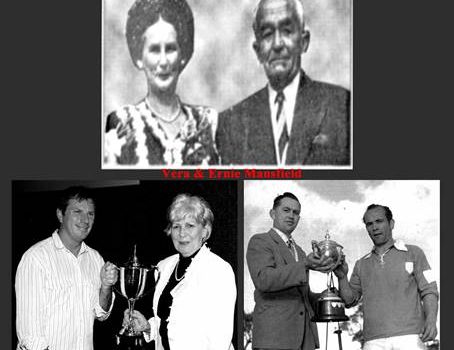 was originally from Kew in Victoria and after travelling to other parts of Australia like Tasmania he finally settled in West Australia. Ernie spent time at Cue where he met and married his wife Vera they also lived in Moora before moving to Manjimup. He finally found what he called his Garden of Eden at Margaret River in 1927 and it wasn’t long before he opened his own bakeries in Margaret River and later at Cowaramup.

Ernie was an early worker for Margaret River soccer and his sons Ernie Jnr and Fred also played for Margaret River. Ernie Mansfield Snr turned his hand to committee work for the Margaret Association and the spirit he had for the game was duly recorded by Rowland Roberts in his book on West Australian soccer in 1946.

And to quote a small passage from this book which says; “Another well known soccer identity who has done much in the interests of the game is Mr. Mansfield’’.

Ernie donated an admiral trophy for the inaugural Margaret River Carnival in 1938 which was known as the Mansfield Cup, Fremantle City were the inaugural winners of this cup. This trophy was played for well into the 1950’s, but sadly after the last carnival was played the cup disappeared.

Mr.Mansfield was the patron of the Margaret River Club and Association for many years and was ably supported in his soccer adventures by his wife Vera. Ernie was a quiet respected member of the community.

It is said that you had to be wary of Vera Mansfield on match days as she could be quite boisterous in giving her opinions from the sideline and occasionally prodding with her umbrella, but she loved the sport and contributed along with her husband.

Son Fred took over the Mansfield’s bakery in Cowaramup when his father retired.

Mansfield’s would be truly proud to know that the carnival is the success today that it was in bygone days. Daughter Nancy Mansfield and family re-donated a replica carnival cup in 2004 and presented it to Clive Slater of FMR.