Geordie came from the Yorkshire area of England and migrated to the southwest in the 1927, he settled in the Margaret River district. Geordie Hobson played for Sheffield United as a professional in his younger years and this has been recorded in various publications.

In 1946 Geordie Hobson was the trainer coach of Margaret United who were Runners / Up in the Margaret River League that year. In 1958 we find him coaching the Alexandra Bridge team whose ground was at Karridale the captain of the team was none other than Sam Hart the ex – Metricup player, Alexandra Bridge at this time was playing in the South West Coastal soccer competition, which included the teams of Alexandra Bridge, Busselton Athletic, Busselton United, Nannup and Margaret Rovers. [ All these teams disappeared after the 1959 season ].

Geordies son Ron and his stepson Joe Meads also played soccer for their fathers team and not to be out done his grandson George Jnr played soccer as well. Geordie Hobson had by this time given more than 30 years of his life to southwest soccer and was a real supporter of our game, he was one of the early the characters of the sport well known for his humorous quips and sayings. Players of his team would always comment on the liniment he used for injured players which contained his secret ingredients.

And to quote author Rowland Roberts in 1946 when referring to Geordie Hobson he said, “ When there are men like these about the code will never go down ”.

George Geordie Hobson will be remembered for the outstanding contribution he made to soccer in the southwest region of our State, inducted into the SW Hall of Fame 2004.

Photo 1958 Alexandra Bridge,Geordie is the older guy on the right . 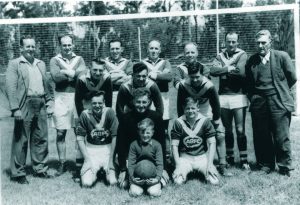