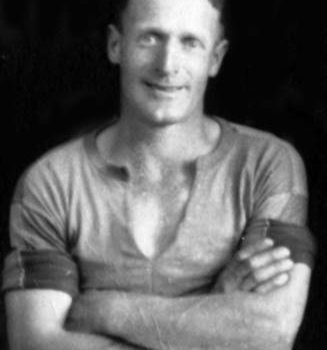 The Blyth family emigrated to West Australia from Liverpool in the early 1920’s as part of the Group Settlement Scheme, Len 8 years old at the time.

In 1933 the Perth League Champions Victoria Park visited the Warren district where they took on the local club Manjimup Rovers, the Rovers defeated the champions three goals to one. It was in this game they came up against and witnessed the ability of the local lad Len Blythe, needless to say they encouraged the young 19 year old to play with them in the Perth competition. Len joined the Victoria Park club in 1934 and played with them for the next three years. Len’s usual position was on the right wing. Len was a member of the Victoria Park team when they won the Perth Championship in 1934,1935, and 1936, he also played in the clubs cup wins in the same era. When he returned to Manjimup in 1937 and he began playing once more for the Warren Association and his club Manjimup Rovers.

Len was a butcher by trade and had a butchers shop in Manjimup he was a well liked personality and was in inducted into the SW Soccer Hall of Fame in 2004.