The Hart Family of Metricup 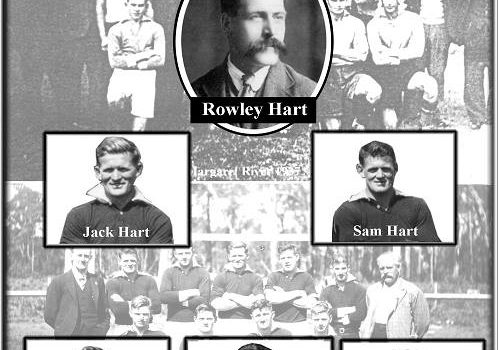 The Hart Family of Metricup

The family patriarch Rowley Hart emigrated to West Australia from Kettering Northhamptonshire England in 1923 and was part of the Group Settlement Scheme, they took up land in the Metricup area which is between Busselton and Margaret River.

Rowley Hart lived and died soccer and was recorded as one of the most soccer orientated people in West Australia who had worked so hard for the code in the southwest. He was the President and founder of the Metricup club (c1929) and he had also taken on the Presidency of the Margaret Association thus ensuring soccer was revived after the 2nd World War.

The Metricup team’s nickname was the Poppies named after the Hart’s hometown, Kettering Town FC. who were also known as the Poppies. The Metricup club played in the Augusta / Margaret league and the Busselton league in different era’s, and the older Wilyaburup club amalgamated with Metricup in the 1930’s.

This family had five sons who along with their father all played at sometime or other for the Metricup club, which was founded by their family. There was also seven daughters in the family and these girls must have been great supporters of the team when their brothers were playing. The sons also represented the Margaret Association representative team and often played in the prestigious South West Cup, this association won this cup on five occasions from 1929 to 1948.

The sons were known as Jack, Sam, Tom, Peter and Ben, although their first Christian names in actual fact were James, Robert, Donald, Peter, Douglas. This could cause problems to some soccer historians in the future.

Two of the sons Sam and Jack Hart were selected for the West Australian team that played England in 1937.

To quote author Rowland Roberts who stated in his book on West Australian soccer in 1946 that in his opinion, “ Rowley Hart has perhaps done more in the direct interests of soccer than any other person in State of W.A.”

The Hart family made an immense contribution to southwest soccer and will be of Metricupemembered both as players of the code and tireless workers for the game.